The Communidad Valenciana is a region in south eastern Spain which is divided into three separate provinces. From north to south they are Castellón, Valencia and Alicante. Valencia is a long, narrow region with a coastline of some 518 km, mainly comprising of white, sandy beaches forming the Costa del Azahar in the north and the Costa Blanca in the south.

Looking inland from the coastal A-7 motorway you will see mountain peaks which form the beginnings of the Iberian and Baetic range. The highest of these peaks is the Cerro Calderón at 1,839m which is found in the Rincón de Ademuz. The region’s biggest river is the Segura, to the south of Elche. The other geographically interesting features are the wetlands and marshlands such as those near Santa Pola, Torrevieja and L’Albufera, which attract many migratory birds. Valencia’s coastal strip is very fertile so agriculture has long played a key role in the local economy such that even today it accounts for almost 20% of Spain’s total food production. The main products are citrus fruits, especially oranges, and rice. In addition, Valencia itself is Spain’s largest Mediterranean port. The ceramic industry of the area is world renowned, the famous Lladró figures are hand made in the city of Valencia. Of course, with more than 7 million tourists every year, the tourist industry is a huge part of the region’s economy.

Map of the Valencia Region

Brief History of the Region

Valentia, under the Romans, was quite a wealthy area until it was conquered by the Visigoths during the 5th century. Captured by the Moors at the beginning of the 8th century, it stayed in Muslim hands until the recapture by the Kingdom of Aragón in 1238. It was at this time that Valencia was given the status of an independent country within Aragón. Between 1238 and Philip V’s victory in the War of the Spanish Succession in 1707, Valencia was greatly influenced by Catalunya but Philip integrated it into the Kingdom of Castile and abolished the use of the Valencian language.

Nowadays the official languages of Valencia are Castilian Spanish and Valenciano, which is a dialect of Catalan. You will see some bilingual street signs but generally can expect to have no problems communicating with people in ‘normal’ Spanish.

It wasn’t until the Second Spanish Republic that the next attempts to gain self-government for Valencia became apparent, which were partially realized in 1982 by the creation of the autonomous communities within Spain. Catalan militancy, however, whilst important to some people of the region, has never been as fervent in Valencia as in Catalonia to the north.

When to Visit the Valencia Region

Climate: The majority of the region enjoys a typical Mediterranean climate with long, hot and dry summers and mild winters. Most of the rain which does fall will occur during autumn and spring. However, in the more mountainous areas inland, winters are significantly colder – often with snowy days – and there is a good deal more rainfall. In the very south of the region, around Torrevieja, the climate is nearer to being classified as semi-arid, as the amount of precipitation is no more than 300 mm annually, about half that of the northern part.

Alicante Airport: This airport has long been a favourite gateway to Benidorm and the popular resorts of the Costa Blanca. With over 9 million passengers a year it is the sixth largest in the country and attracts flights from many European airlines.

Valencia Airport:The city of Valencia has its own airport which is rated as Spain’s 10th busiest with around 5 million passengers passing through its terminals. Whilst there are plenty of international arrivals there are currently few options from the UK and Ireland. A few scheduled flights from London are available with Ryanair, easyJet and British Airways.

By Train: The region is extremely well served by rail links both to Madrid and Barcelona. The high-speed AVE service connects Madrid Atocha with both Valencia and Alicante.

By Road: The excellent Mediterranean coastal motorway runs the full length of the Valencia region and almost extends from the French border all the way to Cádiz in the very south of the country.

Alicante: Alicante is one of those cities which has re-invented itself in recent times. It has always had absolutely stunning beaches – wide, clean and with some fabulous eating places dotted along them. But now, rather then the run-down and seedy place it used to be it is a lively, vibrant and interesting place to visit. Certainly Alicante should be thought of as more than just an airport. The castle on the summit of Mount Benacantil, with impressive sculptures in its gardens and tunnels, dungeons and draw bridges, is well worth seeing – and you don’t have to walk up there as there is a lift from the town’s main Postiguet Beach. Something very different is the eleven mile ferry ride from the main marina out to the tiny Isla Tabarca – once a pirate hideaway but now a haven for snorkelers and seafood lovers.

Valencia: Valencia has taken off as one of the country’s most popular short break destinations and it’s easy to understand why. The city is reminiscent of Barcelona thanks to the wealth of historic and modern attractions all located within easy proximity of some fabulous beaches. The old quarter (Ciutat Vella) is a fascinating area to wander round with main attractions including the city’s 13th-century Cathedral, the La Lonja de la Seda World Heritage Site and Europe’s largest fresh produce site at the Mercado Central. El Barrio del Carmen is best known for nightlife with a fine selection of bars and restaurants. The biggest modern attraction is the magnificent City of Arts and Sciences which attracts more than 4 million visitors per year. The city is also home to a Formula One Grand Prix street circuit, an Americas Cup sailing harbour, La Liga football and the famous Lladró factory and museum. 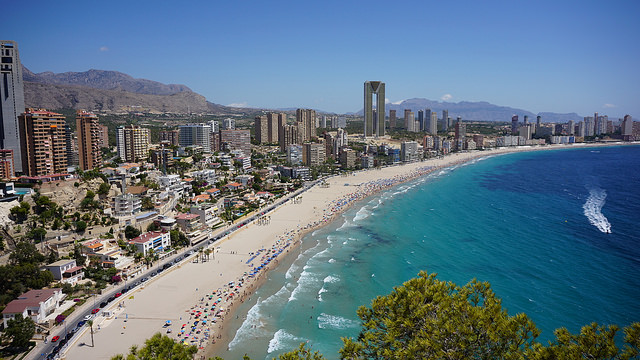 Costa Blanca: The Valencia region is famous, or infamous depending on your point of view, as the home of Benidorm. This popular year round resort attracts millions of annual visitors thanks to its excellent tourist infrastructure, a beautiful and well-maintained beach, its wide range of entertainment and nightlife for all the family. There are many other resorts along the Costa Blanca which have a much more Spanish flavour such as nearby Altea and both Dénia and Jávea further north.

Costa del Azahar: North of the Costa Blanca the lesser known Costa Azahar consists of 120km of beaches in the province of Castellón. Highlights include the town of Peñiscola whose 13th century castle overlooks the beach and the old town of Oropesa del Mar. The annual Benicàssim Music Festival which takes place along this coast is now considered one of the main events on Europe’s festival circuit. Elche: If you’re driving along the main coastal motorway, try to take one of the roads into Elche – Elx in Catalan. This city is just full of palm trees, often in lovely scenic gardens that are cool even in the middle of August. It’s also a centre of the Spanish shoe making industry so you can pick up some great bargains here.

But Valencia is more than just a coastline. Heading off inland can bring some fine rewards. Places such as the hill top town of Morella, in the very north of the region, offer fascinating scenic drives and delightful, seemingly unspoiled Spanish towns. There are equally spectacular drives through the central valleys of the region or across the Sierra Mariola, through Guadalest.

People all over the world know of the famous festival of Las Fallas in Valencia. Held in the middle of March each year, it must be the noisiest festival ever. Locals claim that there are more people walking around with missing fingers in Valencia than anywhere else in the world and you will soon appreciate that they might only be half joking when you witness some of the amazing pyrotechnical goings on here. It’s not just the incredible house-high papier-mache, wood and polystyrene statues. It is the absolutely ear drum shattering explosions that you think you’ve got yourself prepared for. The tip is to keep your mouth open, apparently – for some reason it’s less dangerous then. Don’t let this put you off, though. It’s really a ‘must see’. Somewhat less dangerous, but equally messy in a different sort of way, is the Tomatina festival in the small town of Buñol on the last Wednesday of August. About 30,000 people will throw over-ripe tomatoes at each other for no very good reason other than they’re having fun.

These are the most famous regional festivals but there are many others. You’ll find the famous Moors and Christians festival at many different places at various times of the year. The Alicante festival is in August, for example, and the Benidorm version in October. Two of the most famous are those at Alcoy in April and a seafaring version in Villajoyosa at the end of July, commemorating a Saint Marta inspired victory over the Moors in 1538.

Food and Drink in Valencia

Valencia was the birth place of the paella and so you’ll find it to be everywhere. There is what the locals refer to as Paella Valenciana, which will contain chicken and perhaps rabbit; Paella Marinera, with as much shellfish as the cook can find; and Paella Mixta, which is just as authentic. Valencia is also known for its very sweet bakery products such as doughnuts, coconut cakes and almond rosegons.

A popular local almond-based soft drink, horchata, is worth trying and you might also appreciate Agua de Valencia – a mix of orange juice and cava. There are three local denominaciones de origen – Alicante, Valencia and Utiel-Requena – the last of these three produces excellent quality cava. The Alicante region produces a distinctive if strange-sounding red dessert wine called Fondillón which tastes of treacle and balsamic vinegar!

If you’re familiar with this region please feel free to add any comments below. Our community of readers always welcome anecdotes and additional travel tips.