Whilst the city of Barcelona deserves to have become one of Europe’s most popular short break destinations there is so much more to see and do in the autonomous region over which it presides. Catalonia is home to the provinces of Girona, Lleida, Barcelona and Tarragona which between them boast an impressive geographical diversity. The region has an area of 32,000 square kilometres which is about three quarters of the size of Switzerland. It has 500 kilometres of coastline and Pyrenean peaks reaching 3000 metres which descend through wonderfully lush pine and fir tree valleys.

Beach on the Costa Daurada

In the east of the region around Olot is extinct volcanic territory and just northwest of Barcelona are the weirdly shaped mountains around the legendary Montserrat. In the south west of the region is the Ebro Delta, one of the Mediterranean’s finest surviving wetlands, teeming with flamingos, purple heron and other migratory birds. The coast also offers contrasts between the rocky cliffs and sandy beaches of the Costa Brava and the apparently infinitely wide beaches of the Costa Dorada – with towns as different as Sitges, the main gay tourist resort in Spain; Tarragona, with its lovely old town and Roman heritage; and Cadaqués, with a landscape that illuminates Dalí’s paintings. The history of Catalonia is as complex as the history of Spain itself and helps explain the fiercely independent nature the people still retain. “Catalonia is not Spain” the banners will proudly claim – because they have what Catalans themselves refer to as ‘hecho diferencial’ – the differentiating fact. Catalans have always considered themselves to be different. In the 14th Century, Catalan traders were the equal of those in Genoa and Venice and they developed the wealth of the region. In 1479, when Aragón and Castile united, Catalonia was still independent enough to stand alone. In the War of the Spanish Succession, the Catalans allied themselves with Archduke Charles against Philip V and the reprisals for this continued for many years.

Always a centre for anarchism and socialism, Barcelona and Catalonia were staunchly Republican in the Civil War, again leading to reprisals which were deeply wounding, including the banning of the language in public life. By the mid 1990s, however, Catalonian nationalism was a force again and, in 2006, the region was officially recognised as a ‘nation within Spain’. Today the independence movement remains very strong and has gained extra momentum as the economic crisis in Spain has deepened.

Catalan is the first language of more than seven million people – mainly in Catalonia but also in Andorra, the Roussillon region of France and in northwest Sardinia. It has close connections with Spanish, obviously, but without the Moorish influences, but also has much in common with French vocabulary – as you will often see by the street signs. If you can speak Spanish, you should have no problems in the area as there are few occasions where you will meet someone who only speaks Catalan. If you were to consider moving to Barcelona, for instance, then learning Catalan alongside Castellano – traditional Spanish – would be really useful and greatly appreciated by the locals.

One of the main reasons Spanish politicians worry about Catalan nationalism is that the economy of the region is vital for the nation. For example, 25% of all Spain’s production industries are based in Catalonia. Agriculture, once so important for the area, now accounts for only 4% of the wealth – but nearly all of Spain’s cutting edge electronic, automotive, chemical and textile industries are based here. With unemployment often a third lower than the rest of the country, young people from all over Spain still migrate here for work.

Barcelona’s El Prat airport is the main one in the region lying just 10 km from the centre of the city. The best way into the centre of the city is by train – straight into Estació de Sants, which is where the bus station is, and Plaça Catalunya, at the start of Las Ramblas. There is also a direct Aerobús service which operates every 10 minutes into the city centre. The other main airport in Catalonia is in Girona which serves the Costa Brava resorts and is about a 90 minute bus ride from Barcelona. Alternatively you can fly to Reus near Tarragona which is the gateway to the Costa Dorada and the adventure park at Port Aventura.

The Spanish rail company, RENFE, offers excellent train services into the region. The high speed AVE train service connects Madrid to Barcelona in just over 2 hours 30 minutes, a journey that used to take 6 hours! There are also frequent trains between the other three provincial capitals as well as Valencia, Zaragoza and the Basque country. A journey on one of the high speed AVE trains is highly recommended with seats in ‘Preferente’ providing European rail travel at its best.

In terms of when’s the best time to visit Catalonia, the region’s climate is typically Mediterranean meaning many hours of sunshine, mild winters and warm summers. The higher altitude areas around the Pyrenees experience temperatures below freezing in the winter and annual rainfall of in excess of 1,000 mm, as well as lots of winter snow. Barcelona and the coastal area to the north are much wetter than in the south, as well as being milder in the summer. Inland Catalonia has a continental Mediterranean climate, experiencing very hot days in the summer but also cold winters. Rather than worrying too much about the likely weather it’s probably a better idea to consider what might be on in the region during your visit. 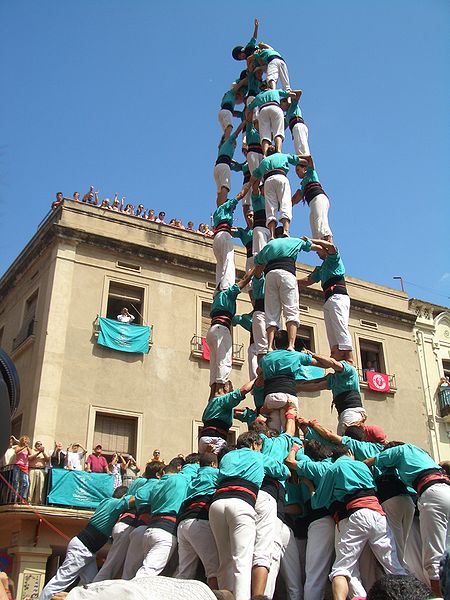 Booking.com
There will not be a week in the year when there isn’t a festival somewhere in Catalonia but, if you can, keep an eye out especially for the chance to see Castellers – the human castle tradition of the Tarragona region. Literally hundreds of people balance on each other’s shoulders to create towers than can be terrifyingly high.

Equally as scary for the unaware are the Fire Runs or Devil’s Dances that often lighten up Catalan festivals. Old figures from pagan folk tales run through the dark streets carrying flames and fireworks – it’s clamourously noisy, potentially deadly and absolutely fascinating!

Many Catalan festivals will feature the far less intimidating fantasy dragons, enormous giants and colourful musicians who will accompany the processions on their way through the streets.

In Barcelona, around about September 24th are the festivities for La Merce, the city’s patron saint. April 23rd will see parties all over on Saint George’s Day and September 11th is the National Day of Catalonia. After being banned for many years during Franco’s time, the Carnivals of February have regained their prominent position – needless to say, Sitges has the reputation of being the most extrovert with its carnival parties at this time of the year.

If you’re a football fan then every other weekend and numerous midweek nights are sporting fiestas as the mighty FC Barcelona attract almost 100,000 fans to their home games at the Nou Camp Stadium. Matches take place between September and May. You can check fixtures and order tickets on this website.

The main destination for tourists in Catalonia is, of course, Barcelona and you could spend the whole of your holiday in and around this fascinating city and still not see all of it. There are, though, many other places that are well worth visiting. For example, the other three provincial capitals are themselves all interesting cities:

Cadaques on the Costa Brava

Of interest to many will be the so-called Salvador Dalí Triangle in north-eastern Catalonia. Starting from the Castell de Púbol, redecorated by the artist in his own inimitable style; leading to the delightful whitewashed fishing village of Cadaqués where he spent much of his early artist life; and finally the eccentric, multi-dimensional Salvador Dalí Museum in Figueres.

A great excursion for those staying in Barcelona is a half day trip to Montserrat, an impressively weird shaped mountain with a monastery at its peak. If you’re going by train from Barcelona, this will give you the chance to reach the mountain by cable car – not for the faint-hearted. You can get the benefit of some amazing views towards the Pyrenees and, on a really clear day, you can even see Mallorca. Montserrat is the home of La Moreneta, the Black Virgin, a 12th Century wooden sculpture of the Madonna and child, which, since 1844, has been Catalonia’s patroness, or female patron saint. Its (male) patron saint, incidentally, is Saint George.

Indicative of Catalonia’s infinite variety, perhaps, is the resort of Sitges, south of Barcelona and one of the most extravagantly gay places you could ever wish to visit! Sitges is so unconventional and fashionable that it is by no means a ‘gays only’ resort but it is a place for the uninhibited and lively.

What to do in Catalonia

It would be stating the obvious to claim that there is something for everybody in Catalonia but this really is the case. There is mountain climbing and wonderful trekking in the Pyrenees in the north. In addition, there is skiing in the winter, with Baqueira-Beret one of the top resorts, although many Spaniards like to go into Andorra as well.

Baqueira-Beret in the Pyrenees is Spain’s Largest Ski Resort

In the south, the delta of the Río Ebro, with its flat and exposed wet lands is Spain’s most important water bird habitat. Especially popular with bird watchers during October and November, it is estimated that 10% of Spain’s water birds spend the winter here. It’s particularly famous for its colonies of flamingos and purple heron.

The Costa Brava provides some of the best diving in the whole of the country – the Illes Medes and Illes Formigues particularly having international reputations.

You won’t have eaten in a Spanish restaurant without the obligatory Crema Catalana being on the dessert menu but Catalan cuisine has more to offer than just this sweet creamy custard with the burnt sugar topping.

Catalans tend to favour sauces rather more than most of the rest of Spain and, for breakfast, they tend to go for Pa amb tomáquet, which is toasted bread rubbed with a paste of tomatoes, olive oil and garlic. Incidentally, experienced visitors who might want a sandwich mixto might like to know that in Catalonia this toasted cheese and ham sandwich is known as a bikini. Locals love eating wild mushrooms, snails and arròs a la Catalana, which is basically a paella cooked in an earthenware container and without the saffron.

But in an area with so much coast and also with the Pyrenees, you’ll find lots of mar i muntanya combinations on menus everywhere. You’ll also find many good local wines, especially robust reds, but Penedès is the largest and most productive wine growing area and is considered to be the birthplace of cava.

Have You Been to Catalonia?

If you’ve visited Catalonia we’d love to hear from you. Do you have any useful recommendation for our readers, great little hotels, nice places to eat? Just tell us your experiences in the comments box below.